All the News That’s Fit 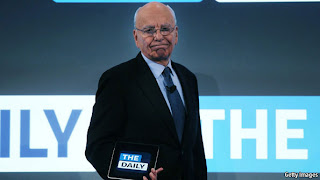 Lots of people writing about Rupert Murdoch’s The Daily.  I like the Economist’s take the best.  The Daily, a subscription news thingy, was created for the iPad.  I was going to call it a newspaper, but it isn’t printed and that’s the whole point.  And while you can applaud his entrepreneurial moxie for adding yet another media entity to his empire, the Economist looks at the issue of revenue, which is more to the point.


Someone with deep pockets can finance a news entity, as we’ve seen before.  In the old days, they did it out of a love for the medium, and the prestige of owning a newspaper.  These days it’s more of a numbers game.  Is it the end of print?  Probably not.  But it’s certainly a move toward two kinds of news, the thoughtful, insightful and well-reported, which we are seeing less of.  And the flash and dash quickbite, with Mr. Murdoch in the vanguard.

OnBeing and the Art of the Interview, Second Look