Floating on the Edge 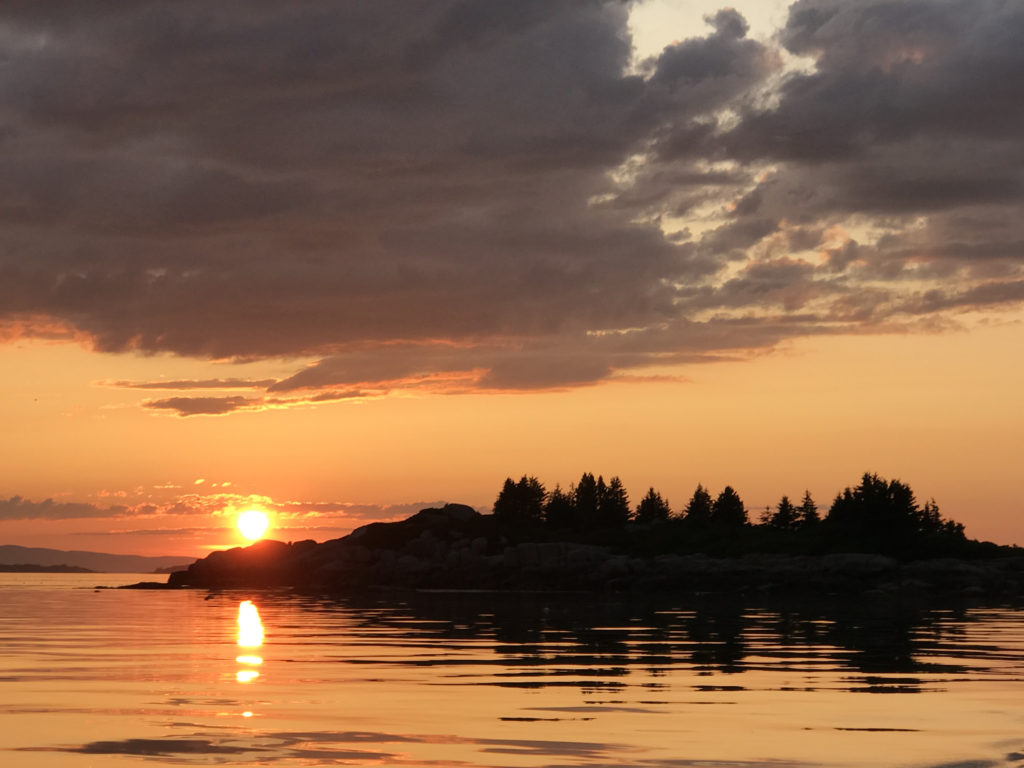 Sharon takes the phone, and talks to Helen while I finish loading suitcases and the dog: after a five-year absence, we’re heading to Maine.

As we join the herd of cars escaping Washington D.C., Sharon tells me, “Helen hopes that he’ll at least make it to Thanksgiving.”

We are silent for many miles, thinking about Helen and Charles and their busy life—they married late, celebrating in one of the gardens he’d designed and built. He was an artist, Helen a PBS science producer. Our summer home was just a few miles from their blue, wood frame cottage.

For 12 years, they’d been part of the gentle summers we’d enjoyed in Maine. Then money grew tight. We had to sell our house and leave good friends behind.

As we head ever north on I-95, I wonder if Maine will reclaim its hold on us. We were lovers once, entranced by its brilliant light, cool evenings and sweet serenity; and I loved it when we had two lives, the Capitol Hill townhouse and our Maine retreat. The hustle-bustle of our urban ways— the culture, the crazy mix of people and places, food, films, museums and music—was exhilarating, and perfectly balanced by our time in Maine, which stirred my blood, offered space, air to breathe….

That balance made me whole and each summer, had helped me find a path back to myself. Could the magic happen again?

Sharon, the pragmatic one, reads my mind. ” Earth to Dan!!! We can’t afford two houses. Not to mention, Washington is getting way too expensive.”

We’ve had this conversation before.

Our dog leans on me, as she does when I drive. Sharon strokes her lush fur. “And our house was built in 1890! The maintenance is killing us. I want to enjoy our time together and not worry about how we’re going to live… and let’s face it, we don’t have that much time left.”

I think about our past summers in Maine, so rich with friends, shared meals and laughter. A billboard welcomes us to the state of Maine, bringing me back to what awaits us.

And We’re Back Again

The edge of change is not razor-sharp. There’s no road sign, no officer at a border crossing, demanding you stop and state reasons for exiting one space and entering another. No, the edge is fluid, thick like molasses—something you ooze across—and it’s easy to get stuck between where you’re coming from and what you see in front of you.

Finally, we arrive and settle in. Maine’s sunlit days warm my skin; the air is fresh with the scent of sea, stone and pine, and with the distant cry of osprey, circling high in a sky so blue. But the shadow remains: Charles hovers on the edge between life and death.

“He has good days and bad,” Helen tells us. “It takes a few days after chemo before he starts to feel like himself again.” Her smile is tight; her whole body is tight, hunched against the coming coldness. She’s teetering on an edge of her own—between the Zen of now and so much looming loss: her man, her love, her lovely life in Deer Isle, still bathed in the glow of summer’s brilliant days.

There’s comfort in their space as they hold on to fading moments. From their back porch, I look down to the water. In a graceful, lilting dance, golden maple leaves float to earth.

Charles’s face shows the ravages of chemo, the bloat of his illness, puffy, sagging cheeks. Watery eyes, just wisps of hair, no longer lush like the flowers gracing their Maine cottage. He always loved to laugh. A big man, his chortling came from deep within. To keep the darkness at bay, I try to get him to laugh.

We speak for hours. There is so much I want to ask, to learn. I want to know how he faces each day. Does he think about his leaving, about nothingness? Is he frightened? Does he believe in anything after?

He still paints every day. I hope that’s a solace.

As we talk, a humming bird joins us. I remark on it, watching it flit about this way and that, unsure which way to go, yet seemingly propelled by a force greater than its tiny body can contain.

Our daughter-in-law, Annie, calls from New York. It’s been a tough pregnancy, but she’s due any day now. Once her baby comes, both of our kids will have two of their own. Another scene change: as a baby enters, Charles makes his way towards his exit, stage right.

You see what I mean. While sometimes an edge looms suddenly, as often as not, it’s a process. When we’re in transition, whatever choice we make, we win a little, lose a little. As we age, we give up some things, like free, easy movement: bending my knee is harder, no matter how much yoga and weight training. We also get something in return: I don’t care as much about all the crap that bedeviled me when I was younger.

And my life is still expanding. My body says, “Whoa, I’m feeling a little creaky here,” but I just climbed a small mountain. I write, do yoga, work out, lift weights, and play drums in two bands. Rock n Roll will never die, right?

We’d hoped to see Charles and Helen once again before we returned to D.C., but she called to say he wasn’t feeling well. What remains is his crinkly smile and a quiet, lovely afternoon on his porch, watching a hummingbird: hovering, darting, wings flapping so fast, so fast.

Maybe that sounds too frivolous. After all, I’m 69, throwaway age in America. It’s hard to say with a straight face, “Dude, I’ll soon be 70 but I’ll still be rocking in the free world.” But that’s what I want.

Sharon nods. She understands. And she sees that I’m finally letting myself be open to leaving our home in the city. I’m almost ready, not yet, but soon, to leap beyond the edge of what’s comfortable and familiar and embrace the great unknown: the next chapter of our life.

Yesterday our son called to tell us Annie had a baby girl: seven pounds, seven ounces. “Lucky seven,” I said.