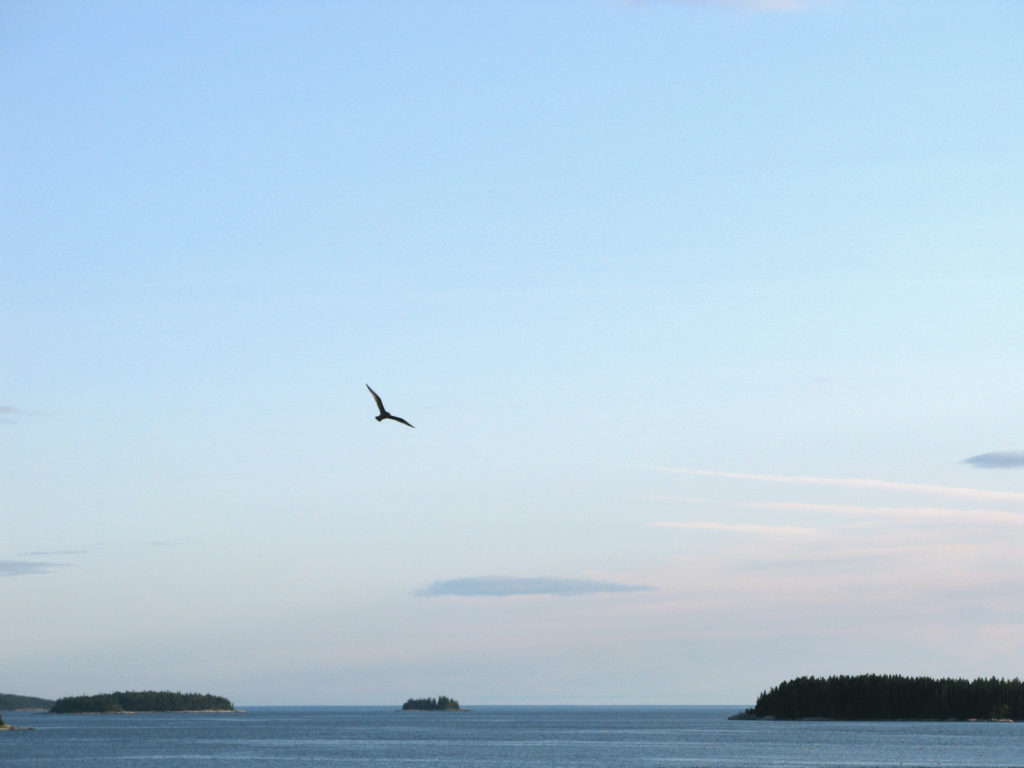 This can only happen five blocks from my house. Nowhere else in America will people be hired to wait on line for a seat at the Senate Asbestos Hearing, which has yet to be scheduled. But every day they wait, all day, all night too in white plastic or metal and canvas-backed chairs on the sidewalk across from the Hart Senate Office Building. Waiting for the hearing to start.

Some are retired folks, some aging hippies, some college students. Some moonlighting messengers and UPS drivers. Some homeless people. A man, very presentable looking, who warns about spittle and other unsavory liquids that awaited the unsuspecting restaurant goer. A woman with scared eyes keeps to her own wary counsel.

A heavy set black man comes over to admire Suviaamu, our dog, and was very interested in her lead (which is called a gentle leader but looks like a muzzle) telling me he should have done that for his pit bull, who chewed up all his furniture. All that furniture lying in tatters back home. Later I saw him strumming aimlessly on his guitar.

They were accompanied by down jackets (everyone agreed they were the best) and tarps and all other manner of protective coverings. They go to the bathroom at Union Station four blocks away or at the Exxon station on the corner (just a two block trek).

During the incredibly violent thunderstorm a few nights ago, they covered their stuff with tarps and found awnings or overhangs to wait out the storm. Inches from the unrelenting downpour. Two spent their time in an empty guard booth.

They work in shifts, making $10 per hour. For waiting. Overtime too, working 12 to 12, so everyone gets some daylight and some nighttime hours. I learned all this from a stringy-haired guy who had 100 hours last week. $1,300 that week for biding his time waiting for an unscheduled hearing outside the Hart Building.

Actually, biding someone else’s time, since they were paying him for his time, which I guess they now own, making it their own. Timeless, actually, since the only thing that really separates the days is the weather.

They’re treated like homeless people, of course. Sitting there in their all weather gear while all the men and women in suits go by, intent on deciding what the rest of us can and can’t do with our lives. While the waiters wait, racking in the hours.

They did the same thing last year, only the line was across from the Catholic Church, which didn’t fit that well, since it looked like the church was ignoring their plight. When, in fact, the church was just an innocent bystander, if you know what I mean.

I wondered how they control the line. I mean, what happens when you have to pee, do you loose your place? No, they work it out amongst themselves, said the stringy haired guy, very easy like and friendly. Telling me the advantages of the gig, like I might be wondering if it was the job for me. Didn’t tell him that I’ve been doing the same thing, though without the pay.

He has vitiligo on his hands, just like me. I guess we have a lot more in common than first meets the eye. As it were. I also have alopecia. Loosing my hair, skin turning white. Body generally freaking out while I’ve tried to remain calm.

Amazing how stress plays out. If it don’t get you one way, it will another.

Just like the job that fell out of the sky last week. To work on staff, meaning full time, at a company called GVI, which does production and post-production.

Called me and asked if I’d be willing to work as their senior editor. And, just like that, the world turned. I was no longer one of those people on line waiting for something to happen. Something did happen. And I grabbed on to it as it passed by, deciding to change my life and say yes.

Part of being a senior editor is doing online, as opposed to offline. Online is the technical finishing part of the creative process. Something that I used to roll my eyes about, but had to learn and now will become expert at it. Kind of a nice circle, from on line to online. Just a little space can mean so much.

Gives me a lot more space in my life. Room to breathe. To stretch and grow, becoming more technically proficient (already have the creative side working).

And I know a lot about the technical side, but these days there’s much more to learn. And now there’s the opportunity to do just that. Amazing how a phone call can change your life.

One Day and Everything Changes

A phone call from Sharon offering me a job, and I end up married. A phone call from Maria Nicolo and I work with her, Leo and Maryland Public Television on the Mini-Dragon series and go to Japan. They send me to Japan to direct the Japanese TV creative effort. I was definitely on line during that one. Making it up as I went along. Grew enormously. What a great opportunity. And now, another call.

Amazing to live in a world where things fall out of the sky. And there I was, on the line to receive it. “Yes.” I said, “Yes, I’ll do it.” Even though what went through my brain was I’m giving up my freedom.

I mean, long term planning used to mean next week, and now I’m on the line to GVI for the rest of my working life. Unless things change, which, you never know, they might. But I thought about it and saw only upside to doing it. No downside at all, really.

Unless MGM finally calls. Or Michael Anthony for The Millionaire John Beresford Tipton. Haven’t heard from them yet. But you never know who it will be on the line, right?

So I start Monday. A new job. A new life. A chance to be part of something. A chance to gain more technical expertise. Which will stand me in good stead no matter what happens. A chance to work at a place with a great, low key attitude about what they’re about.

And the owner is someone who likes to laugh and wants to have a place that’s relaxed and about fun. If you’re not having it, then what’s the point? And, most amazing, he said to me when he had me on the line, that he respected the fact that I’ve been a freelance person all my life and I should decide what I wanted to do as far as a schedule went.

He asked me to make the schedule and then we’d go from there. And I told him I wanted a month off in the summer. He said he could live with that. So I can spend a month in Maine chillin’ and the rest of the time I’ll be gainfully employed.

A little song has been going through my head. A job. What a concept.

So one door closes. Goodbye freelance world. Goodbye all those days to drift and float through life. Chances to have that second cup of coffee, go to a museum. Do some writing, thinking. Whatever. Also the freelance anxiety of not working, of not being chosen, of cash flow problems, or the problem of cash not flowing.

Yes, but the door that opens, it seems to have a lot of possibility attached. And I grab it with strong hands, open it wide, take a breath and step on through.