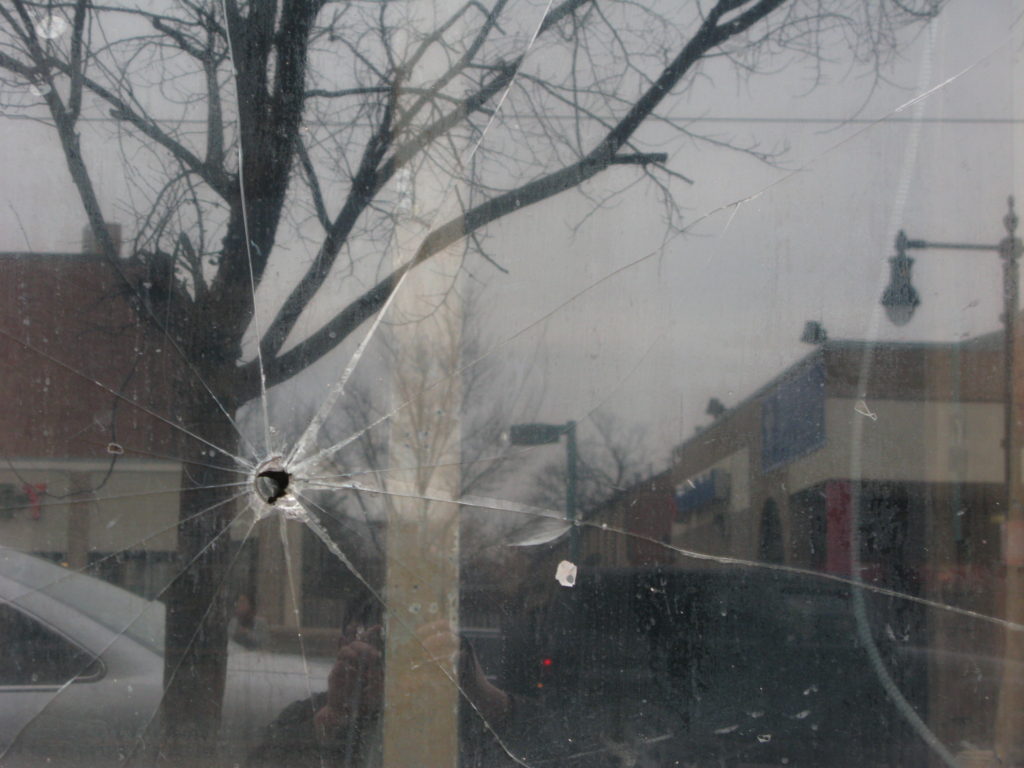 Right at My Face

I’m sitting on the couch in Paul’s apartment, still a little high, thinking how the sun had cast diamonds over the river by Chickie’s Rock. When I close my eyes, I can see the dappled light through the shimmering leaves and almost feel the warmth on my back. It was the last time we’d be out there before graduation. I sigh and open my eyes.

Paul’s friend Bean stomps in, uptight and weird. We were all at Chickie’s smoking dope and getting mellow, but Bean looks like trouble on the hoof. He raises his hand and now I’m staring at the barrel of a gun. His white knuckles aim the .45, right at my face.

What the hell is going on? Why all this fury pointed at me? My eyes lock on that ugly, black barrel. My thoughts fly about, looking for escape.

Bean sought out our anti-war group soon after he arrived at school. He looked the part: lanky, with long blond hair, a twisted smile. He rarely spoke; it was hard to tell where he was coming from. Even then, he gave off a vaguely threatening vibe, so I tried to keep my distance. Now we’re face to face.

How did I end up on this damn couch with a baby-faced, brain-addled peacenik standing over me, ready for mayhem?

Our Little Band of Outsiders

We were a little band of outsiders – into teach-ins, leaflets and protests – on campus and off. Everyone else seemed stuck in the ’50s: madras, khakis and keggers. We’d leaflet, petition and say, “Open your eyes!”

They just saw blue skies stretched to the horizon, content with business as usual. Maybe they couldn’t feel it, but new ways were smashing into old ideas and a hurricane of change was coming.

Bean had brain storms of his own – he was epileptic. “If I have a fit,” he told us, “put a stick in my mouth so I don’t bite off my tongue.” It must have been weird for him growing up – all that shiny privilege tarnished by raging convulsions. Kids calling him “spastic” and “retard” – each episode opening a chasm between what he wanted and those mind-wasting moments.

Maybe that’s why he sought us out: we viewed the world differently, were open to those who didn’t fit in – and saw ourselves as pretty mellow.

Still, we stormed through our days railing against the war, blasting the system and shunning those who supported it. We thought we were right, and maybe we were, but it soon devolved into them v. us – and there were a lot of them. We’d say, “out of Vietnam.” They’d say, “take a bath,” call us “hippies,” “commies” and worse.

We leafleted the homecoming game. People spat at us. We had teach-ins to talk about Vietnam, 1000 students petitioned support for the war. We picketed a factory making bomb fuses, demanded they stop. They didn’t.

We staged an all-night vigil outside the draft board. Two motorcycle punks smashed into our group and started punching. Everyone was riled up. Faculty and students marched through town chanting “free speech.”

Town detectives searched the campus for radicals and commies, hoping to make a bust.

Things we took for granted were drifting away. Our sense of ourselves, of who we were and what we valued, was all under water and the dam about to burst.

I think about the first time it came down to flee or fight. It was the middle of 8th grade, a new school; the tough kids went there. I was shy and scared, safer hanging out in the shadows. I kept my head down and tried to be invisible.

Kids made fun of how I walked, my glasses and skinny body. I was the 98- pound weakling I saw tormented on the back of comic books. I took refuge in my classes. But, then there was gym.

Coach liked to tout the Spartan warriors, how they believed wrestling taught you to be a man. You had to be hard and strong – overpower the other guy, take him down, pin his back. “Men,” he’d remind us, “learned to fight and win.” I dreaded it.

My turn came soon enough. The other kid was bigger, with a crew cut and a sneer. He looked me over, spit on his hands and said, “you’re mine.” My heart pounding, I barely heard the whistle. “Get him,” they yelled. “Kick his butt.”

Like a bad dream, he grabbed hold of me and we were down, scrambling over the mat. I twisted and turned, refused to give up. I could smell his sweat, his hot breath on my face. He tried to pin me, tried again.

Somewhere deep inside a volcano of rage erupted. I broke free, caught a leg and drove him on his back. I was a destroyer, ready to grind him into dust. Even after coach raised my hand, I was ready to kill. Were the Spartans right, did I become a man that day?

We came of age in a world of winners and losers, fighters and cowards. The politics of the day was about being ready to fight – to stand up, be a man. Then the future slammed into the past and blew it away. Civil Rights, Vietnam and the Woman’s Movement changed everything. It was a tumultuous time; our ideas about women, race and war shattered. We struggled to put back the pieces. Everything was hot, intense – rebellion was in the air.

So was paranoia. What were we fighting? Who could we trust? Maybe all those pointed fingers and hostile stares did something to Bean – that social chaos slashing his sense of self. Maybe it was his struggle to be a man. Either way, he had something to prove.

“What are you so mad about?” Trying for words instead of bullets.

Ice blue eyes freeze my thoughts. He spits out, “An American.” Like that explains everything. He doesn’t know me… just sees what he wants to see… like everyone else.

I say, “I hear you. An American. You’re a true American.”

Who are we, really? Do we let other people’s clichés define us? Or, is all this just a physics problem: action leads to reaction, one following the other like clouds and rain, until we’re swept away by the flood.

I feel steam rising inside me. I take a deep breath. Let it out. “Bean, we’re more the same than different. We both choose this school… share some classes… and friends.”

How do I – how do we – thrive in a world where mistrust and anger are so common? I hope he can hear me.

“Bean, America’s a big country. There should be enough room for both of us, don’t you think?”

Bean regards the gun, looks back at me. Time stops…

Paul bursts into the room. Paul’s a good guy: smart, easy grin, likes to laugh. In a heartbeat, takes it all in.

“Bean! What are you doing?” He’s Bean’s self-appointed handler, tries to keep him sober, out of trouble. “What’s going on, man?”

Bean’s eyes do a roll. “Nothing.” He drops his hand, tries to hide the gun. Paul holds out his hand. “Hey man, give it to me.”

Bean looks at Paul, turns back to me, pops the clip, points the gun at my face and pulls the trigger.

Bean giggles and scampers away, an overgrown kid. Paul goes after him.

The room fills with people. Alice is there, who will be the mother of our two children, my best friend Richie, who will have a daughter of his own, and Skip, who will marry his college sweetheart and have two kids and now, grandkids. The room bustles with crazy energy, everyone talking at once.

That was 50 years ago and, for better or worse, I’ve become the man I am today. I see all those many selves that lie within me: the love and caring, the toughness and anger. Each time I encounter another person, I bring that baggage with me… as do they. So, are we meant to be Spartans or something else?

We don’t live in a world of dichotomies. It’s not about fighting or cowardice, softness or strength. No, each encounter offers an opportunity to explore how we see ourselves and how we respond to each other. Will we trust who we are and find the courage to face our demons?

Can we find the power to change, evolve and grow?

It’s an issue for each of us, and for our country, too. If we don’t, I fear we’re doomed to find ourselves back at that funky couch: two guys, a loaded gun and bad, bad karma.