Why More is Less 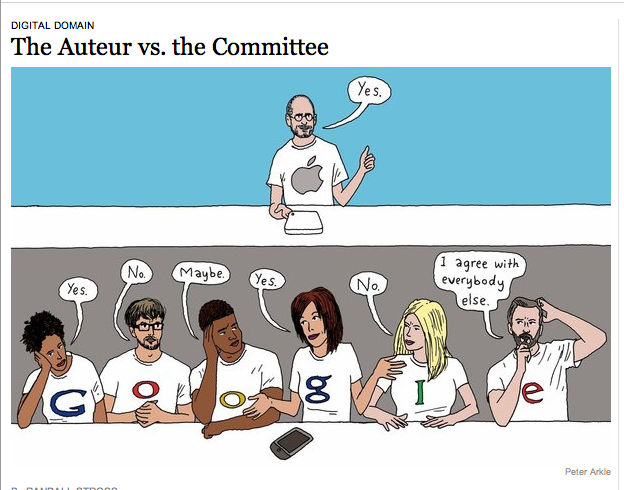 Where do vision and inspiration come from?  A recent debate on design by committee (a la Google) v. the “insanely great” work coming from the Great Designer himself (Steve Jobs) aired in the NYT’s Digital Domain recently.  And the big idea put forward was to model design in the digital world after the auteur theory of film directors.  That the creator’s vision (rather than the committee’s) should drive the design-decision process.


In the film world, the theory goes, the auteur director guides every aspect of the production, running the creative team and making the key “design” decisions that inform the finished film.  Simply put, the director has creative control.


Working in a parallel universe, I thought I’d write a little about the power of one v. the input of many.  Because as a “creative” I deal with this issue all the time.  And while I do my best work working alone, I also value the input of others.


What I find fascinating about the creative process is that there are times when another’s input allows you to see the work afresh and to re-fashion it into something better than you would be able to do entirely on your own.  But, as in much of life, timing is everything.  And the input is really helpful when it accurately reflects on a hidden or unaddressed problem in the material.


Such as, “this part is unclear or repetitious” or “why not bring this idea closer to the top so we become more curious or more grounded” or “you could shorten this part…”  I think you get the idea.  If you learn how to listen (and not prejudge what’s being said) you can see how they’re responding to your creation.  And that helps you understand if you’re really delivering an effective piece.


What I like to do is create the structure first, then have people react to it. Because part of the job is to find a clear and compelling way to tell your story. And, if I’m able to do that well, then the critique I get is very useful. And the bridge between the creator and the committee (also know as clients) becomes stronger because we’re all working on the same page. And everyone comes out on top.


This gives us another way to look at the battle between engineers and designers described in the NYT piece.  But I suspect we’re also talking about that old issue of form v. function.  Two different ways of seeing the world.  And when you can find a way to combine the two, as Apple seems to do time after time, you end up with something that captures the imagination.  And that’s a bottom line I totally endorse.