This is how it was billed on Kickstarter:

Well, that sounded interesting: a street art concept proposed by “a girl in salt lake city.”
Here’s her pix: 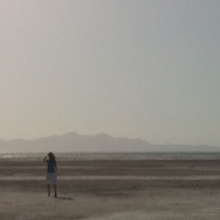 She describes herself as:
“Writer+printer+lives in a white house with a small desert.”
Sounded intriguing. And when I read the pitch, I was hooked. Here’s an edited version of what a girl in salt lake city wrote:


This past summer, my best friend and I found ourselves crying in public for various reasons and in various places (multiple sidewalks, a gas station, an auto parts stores, a concrete bench outside a law building). We made total spectacles of ourselves.
People who cry in public force everyone to witness—it’s completely embarrassing and also sort of awesome. We want our essay to perform this kind of spectacle.

So! We’re printing our essay over four 11 x 17 broadside posters and posting the edition of 350 (that’s 1400 posters!) You’ll choose 3 posters to display somewhere in public (on a top-secret designated day in November) and keep the fourth as a thank you prize.
Help us out. It’s going to be rad.
Well, if it’s going to be rad, I wanted in. So I became a supporter/curator. And started getting updates and photos: 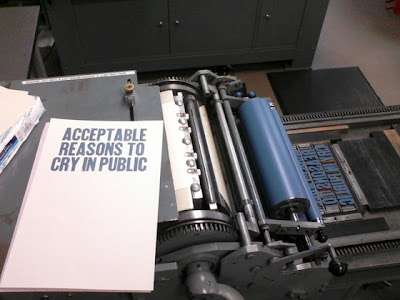 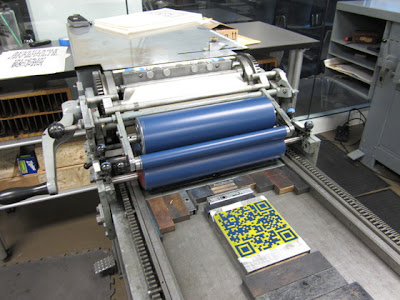 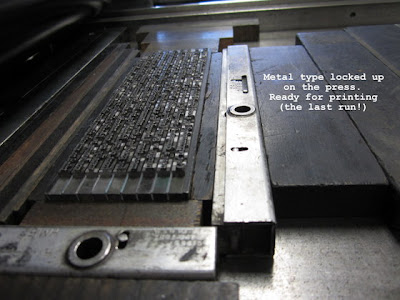 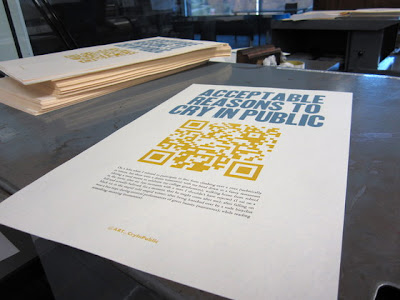 You can see each poster required three runs, one for the header, one for the QR code and one for the essay at the bottom.  More updates,  and we caught a glimpse of a girl in SLC. 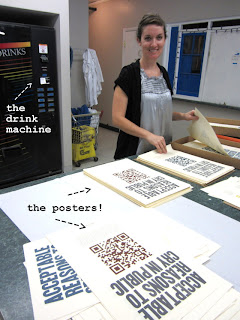 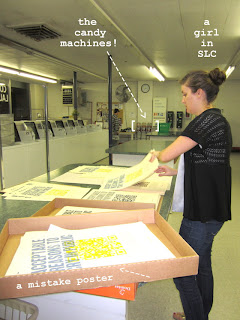 Each poster quartet would be placed in a “gigantic
envelope” and mailed out to the supporter/curators. 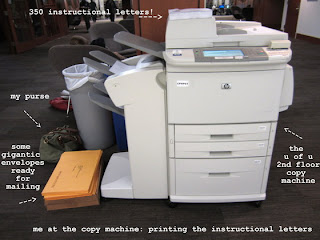 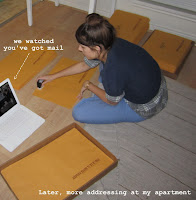 And soon, each of us would be posting her broadsides and offering random passersby the opportunity to reflect on acceptable reasons to cry in public. I liked it. 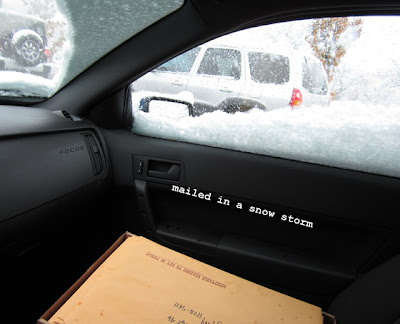 I also liked that, by connecting with us via Kickstarter, a girl in salt lake city was able to conceive her art in one part of the country and export that vision to people from all over the place. 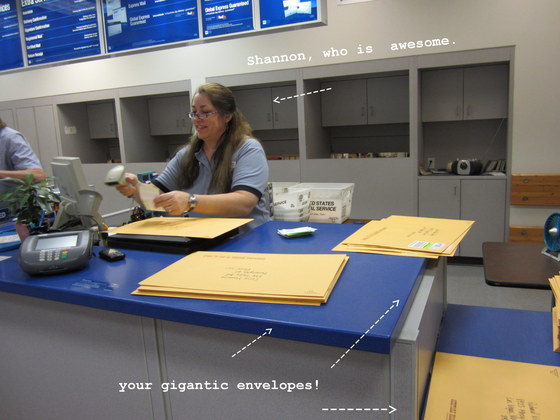 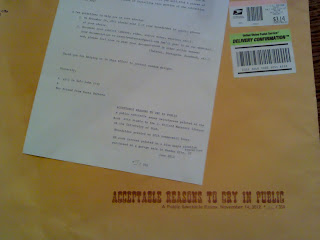 And soon my envelope arrived, with instructions announcing that the top-secret day to put up the posters was at hand. After thinking about possible locations and a little trial and error, here’s what I did: 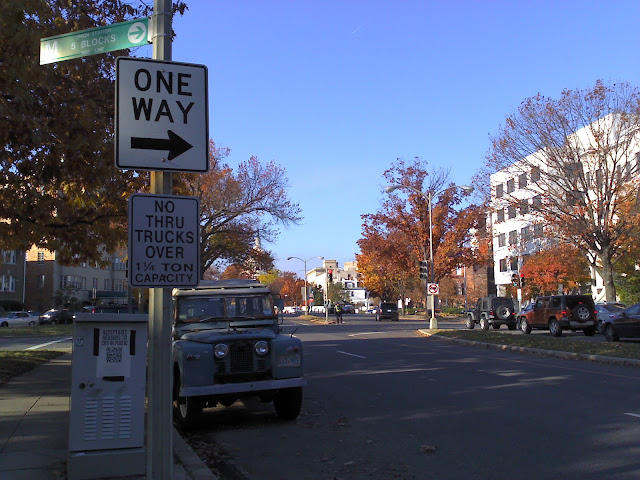 This place gets a lot of foot traffic as people walk back and forth to the Metro.  And I like that it’s kind of tucked away. You can see the tiny figure of a policeman observing the poster installation – he’s standing on the island in the center of the street by the intersection. 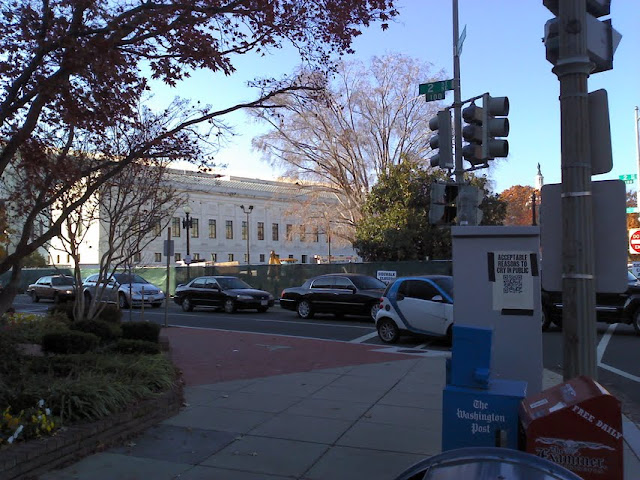 That’s the side of the Supreme Court on the left and the Capitol dome peaking out above the poster. Honestly, I kind of chickened out on this one, so I went back at night and moved it. 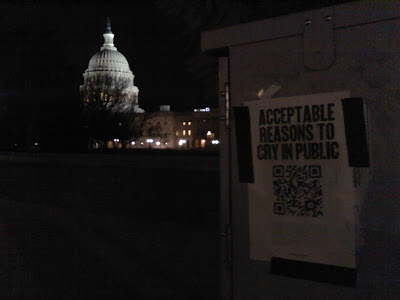 There was a Capitol police car about 20 feet away from me when I posted this. But I figured, what with free speech and all, it would be cool. And, if busted I could always claim, “art project!” 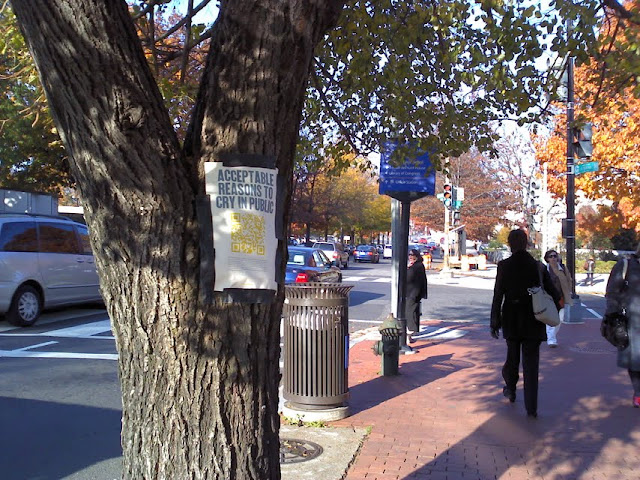 Peter Bis was a street person who cheerfully sat under this tree for years, greeting people on their way to the Metro at Union Station. As we passed by, he’d shout out “two days to the week-end” or “no skinny-dipping” or, to me he’d add “how’s the puppy?” I looked forward to those little encounters as a way to mark the start and end my work day, and often saw him in conversation with others, charmed by his friendliness. He died suddenly a few months ago and his tree was festooned with remembrances. 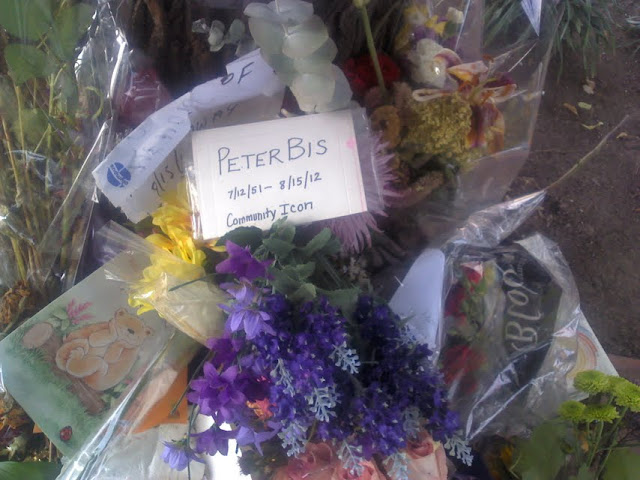 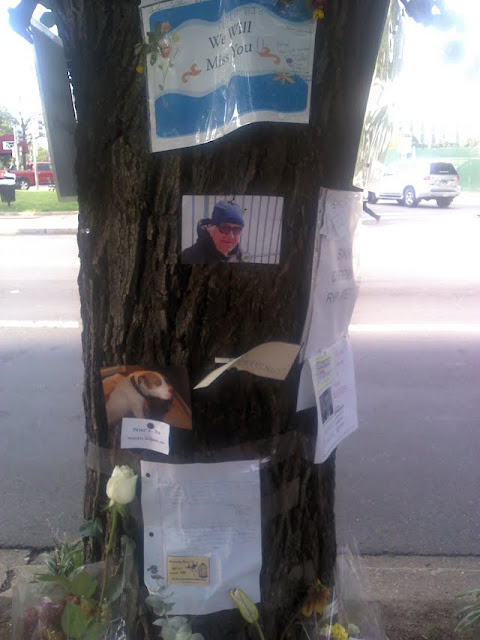 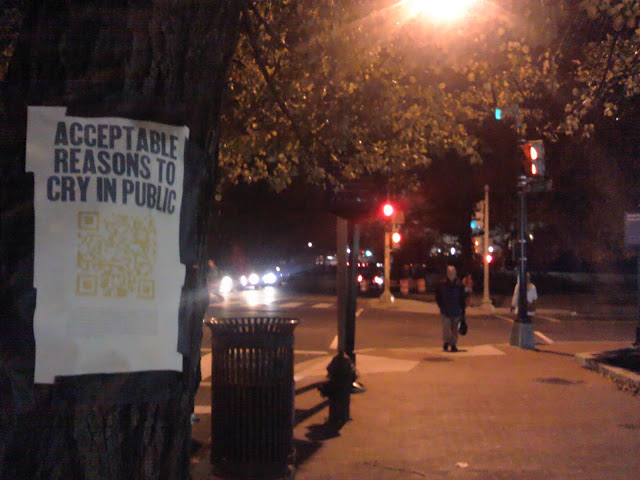 The morning after I took this photo of Peter’s tree, there was a single yellow rose affixed to the poster. Just another reminder of how many of life’s events and experiences we all share. And I’d like to thank a girl in salt lake city for reminding us about the random ways we connect with each other.

If you want to see the efforts of my fellow curators, you can follow them on her site here. If you do, make sure to check out the twitter feed on her site.