What You See What You Get 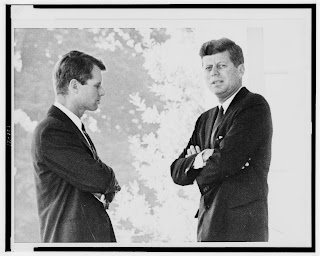 Is what you see inevitably what you get? Well not necessarily. Here’s an example of what I mean:

Working on a video for the US Conference of Mayors about JFK and the Call to Public Service. Using still images from his presidency and moments from his speeches to capture that sense of who he was and how he inspired others. And opening the piece with just a few comments from mayors talking about how he inspired them and the nation.
Since this was to be an introduction to the video, I wanted to keep the comments short and succinct. So I chopped up their statements to pare down their thoughts and organized them to get the flow I wanted. So far, so good. But then the question: what images should I use? It would have to be something to visually play off what was being said.
Since this video is being created for the 50th anniversary of his presidency, I wanted something dreamy and nostalgic for starters. That, plus the right kind of music, would give more emotional weight to the opening and more power to the comments. When I saw this photo, I decided to shape the introduction around it. This photo is a great example of the difference between seeing and perceiving. What do you “see” when you look at this image and how do you perceive or take in what you are “seeing?” In considering the creative process, each question gets a different answer. Here’s what I mean:
Objectively speaking, the photo above shows President Kennedy consulting with his brother Robert, who was then Attorney General. Their body language shows a personal and “private” moment and reflects the seriousness of what they are discussing. The president is obviously distracted by something or someone. Probably the photographer. He is looking away from his brother, and facing the camera. That’s the first thing I “saw.” But I perceived something else. If the photo was cropped to focus just on the President, it would give the image a totally different context. Still a serious moment, but more abstract. And now you can read much more into the photo. The President’s gaze seem as if he was looking right at the viewer, as if sending a message. Which makes it very engaging. 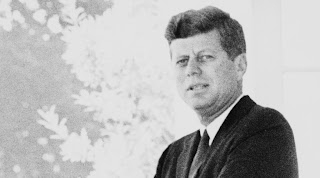 And look at the background. You can see leaves, but they’re white. Meaning it was a sunny day and the Kennedy brothers were in shadow, probably standing under a portico at the White House. Also, the photographer was some distance away, using a telephoto lens, which flattens the image. Now the background is out of focus, making the image a little less “real” and more abstract. If the photo was exposed for the sun striking the leaves, the President would be in darkness. But printing the photo so you can clearly see his face also gives it a grainy quality. Again helping make the image more abstract. And that abstraction takes you out of the “reality” of the moment and makes it easier for you to add in someone’s thoughts or feelings. The bottom line? You get a dreamy, almost ghostly quality to the image. Perfect for a representation of nostalgic memory.