So in the Cool Tech Phone Wars of late I’d usually declare Apple as the winner.  I talking about marketing here, not the actual products.  The Android spots I’ve seen on TV make me nervous, feeling like something is going to blow up or drill some virtual hole in my brain.  See what I mean:


But Google’s video arm, Studio G, has come up with a marketing video I like a lot.  It has a low key anti-tech feel. The spot starts with this image. 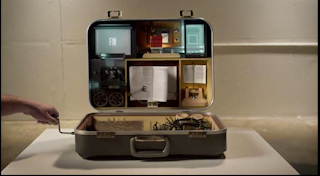 The video is totally retro as it promotes Google Play, which is their rebranded destination for all things Android.  And what I like about it is the concept, showing all kinds of antiquated gear in a box (all stuff that we used to use not so long ago) that becomes cool in a steam punk kind of way.  Here’s the hand cranked box.  I do like the concept because it totally plays against techno cool.  Which gets your attention and makes it fun too, watching the camera move from one piece of gear to the next.


What unifies the concept is the panning camera, which moves from gear to gear as the voice calls out what you can do in your new Googley world they call Play.  They got the shot they liked on take 14.  You can see their video here.  And you can read a little about the making of the spot here.  Check it out.