Time, Place and Purpose: The Identity Art of Jorge Rodriquez-Gerada


Some artists like to work on a grand scale.  Then there’s urban artist and former “culture jammer” Jorge Rodriquez-Gerada, and his Identity Series.


For the Identity Series, he portrays everyday people who have a strong connection to their community and then finds a suitable space for their portrait.


But these eloquent images are only part of the story.  Jorge creates all of these portraits in charcoal.  As they gradually fade away they encapsulate identity, memory and the tenuous nature of our existence.


Here’s a short video showing the creation of Maria Barcelona, while Jorge explains what he’s working towards.

If the video doesn’t play you can watch it here. 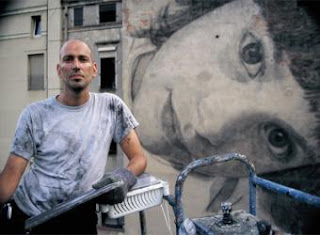 Jorge began the Identity Series in 2002, with a complex vision.  It’s about the process of capturing the person in charcoal, the impact that enlarged image has on the neighborhood as they see one of their own on such a grand scale, and then the collective memory of the work, after the wall portrait fades over time.  Jorge says, “the memory that is left confirms the importance and fragility of every existence. My intent is to have identity, place and memory become one.” 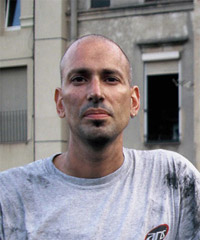 There’s still another dimension to his imagery which, he believes, counters the political and advertising images that permeate the cultural landscape. “I believe that our identity should come from within, not from the brands that we wear. We should question who choses our cultural icons and role models, as well as our values and our aesthetics.”

This portrait of local resident David quickly became a political statement when Jorge created it in Spain’s Basque country. The video below explains:

If the video doesn’t play, you can watch it here.

There is so much we take for granted about the impact of art and the artist. We assume the artist has uncommon skill and talent and that great art is a creation that lasts for the ages.

Of course I’m oversimplifying, but in Jorge’s work we have a strong visualization of what the winds of change both create and destroy. And I think there’s something at once inspiring and humbling about his art, as it celebrates our common humanity and points towards the impermanence of everything.

There’s more to his story that you can check out on his website. Here’s a link to an interview he did last year. And I’d like to end this post with two images from his Terrestrial Series.

He created this homage to a beloved Spanish architect from colored sand:

Here’s a link to a video showing how he did it.

Then there’s the image below, made from 650 tons of sand and gravel, created just before the 2008 US election.