When I was young I loved reading Science Fiction.  Of all the fantastic characters I encountered, one totally captured my imagination, thanks to Isaac Asimov.  And that was Hari Seldon, the inventor of PsychoHistory.  Through his genius and the science he created, he was able to predict the behavior of populations and, through that, forecast what would come.  In Asimov’s Foundation series, Seldon’s advance planning allowed civilization to thrive far into the future.


I was so intrigued by this idea of predicting behavior that I ended up a Psychology major in college and even did a little graduate work in Social Psychology, before I saw that we were a long, long way away from even understanding behavior, much less predicting it.

But now we have MassMotion, software that predicts how masses of people will behave as they pass through a specific location, such as a train station or whatever.  Here’s a link to a MassMotion video showing crowd behavior at Toronto’s Union Station.  They expect in a few years that 70,000 people will pass through the station at rush hour.  The MassMotion video portraying people in this space is a bit eerie, to say the least.


The software was created by this person: 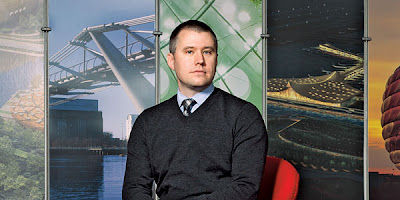 His name is Erin Morrow and recently Bloomberg
Businessweek ran a profile of Erin and his software.  Now you might think that this is all about vectors and geometry.  But more than that, movement is about desire — to get somewhere, have some coffee, go to the bathroom, meet a friend, whatever.  And that’s what makes MassMotion interesting — it’s about predicting behavior.


Here’s how Businessweek describes it:


MassMotion takes 3D computer models of buildings and fills them with “agents,” virtual figures that represent people. These avatars aren’t mindless and in fact have specific personalities. Some meander. Others are busybodies in a rush. The agents will linger in front of signs and puzzle over directions, and they’ll also grab smokes together outside of exits. “They all have certain things they care about,” says Morrow. 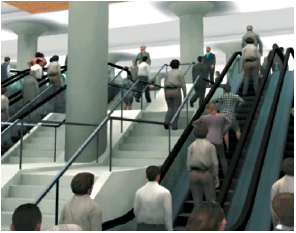 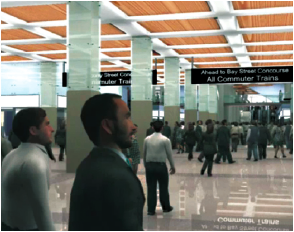 Businessweek writes that MassMotion is also used by police to predict how crowds will disperse.  And to forecast how people will evacuate buildings.  Actual results are reported to be virtually identical with what the software showed. 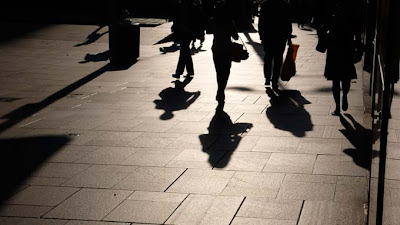 Perhaps this is all benign, just a new useful tool for architects and planners.  But if you take the mountain of data that all of us generate when we make a purchase or fill out a form or join something on the Web.  And add to that a growing ability to predict behavior.  Then maybe it’s not too much of a leap to wonder if predicting behavior will someday morph into controlling it.