JR Is Changing the Way You See Things 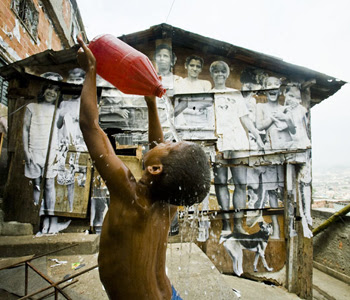 Street artist JR creates work on a grand scale, putting a human face on some of the world’s poorest communities.  He might show up in a shantytown or favela, photograph people he finds there, blow up their images and paper their neighborhood with the results.  Where Christo would wrap buildings and bridges to recast a city as a surreal abstraction, JR creates a different cityscape, working with photos of people to construct a heightened reality.  His images celebrate his subjects while insisting on your attention, bringing new meaning to the phrase “larger than life.”  There’s an enormous sense of humanity there. 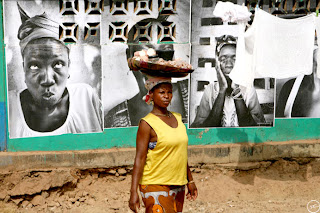 In a recent NYT article he talked about why he does it:  “I think it comes from several things.  Firstly, a real curiosity about the world.  Then there’s the fact that one of the things that touches me most is injustice.  I’m of mixed origins – North Africa, Eastern Europe, Spain – and this generation today, we’re all a little bit from everywhere.  I was born in France, but I feel comfortable everywhere – I don’t see the borders.” 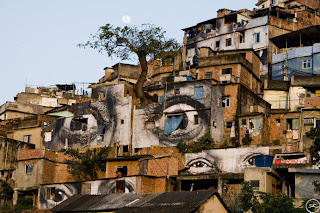 He recently opened his expressionistic film in France, Women Are Heroes.  The trailer is hypnotic as it juxtaposes scenes of daily life in some of the world’s most forlorn communities, moments spent with the people who live in them, and speeded-up footage of JR’s gigantic photos being affixed to the structures that populate those places. 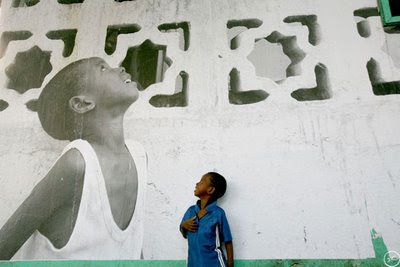 He’s recently won a TED prize, $100,000 for “one wish to change the world.”   Here’s a great blog and another where you can see some images of JR’s Work.  His work reminds me of James Agee‘s profiles and Walker Evans‘ portraits of sharecroppers from the book “Let Us Now Praise Famous Men.”  Although separated by years and genres, each found a way to bring attention to people hidden from view.  As JR sees it, “To change the way you see things is already to change things themselves.”