Window on the Soul: The Portraits of Dawoud Bey

Dawoud Bey was hoping to be a jazz drummer when he went to see “Harlem on my Mind” and was struck by the images of everyday people displayed on the museum walls.  As a 16-year-old he’d just received a camera and was inspired to do his own street photography in Harlem.  That collection of work, exhibited in 1979 as “Harlem, USA,” was the beginning of an impressive career exploring the photographic portrait.  A retrospective of “Harlem, USA” is now at the The Art Institute of Chicago. This image “Man in a Bowler Hat” was taken at that time.

Notice the man’s open, friendly and curious expression and how the gesture of his hand at the bottom of the image adds a sense of relaxed  elegance.  Those elements give voice to the subjects’ personality and character and are a hallmark of a Dawoud Bey photograph.

The image below, taken a few years later, has all the elements of his recent color work:  the girl is posed, as are all his subjects, but natural and relaxed.

Unlike street photographers who try to capture an unguarded moment, Bey wants his subjects to participate in the photograph.  “A Girl in a Deli Doorway” is at once simple and complex.  She offers a wistful curiosity tempered by uncertainty.  While she appears open and engaged, she’s also holding back, and partially hidden with her hand closed. Look at the background and framing.  It’s very dynamic, with strong angles that take you into the background and the hard vertical of the wall that brings you back to the girl.

Just capturing a person’s essence with your lens is difficult enough – but working with teenagers?  Once again Bey has a deft touch.  Here are some portraits of high school students from his exhibit, Class Pictures. 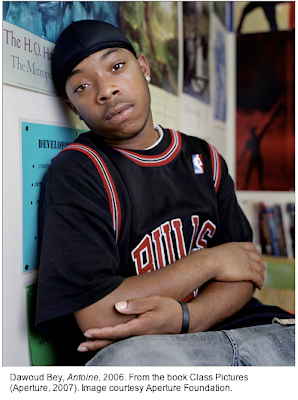 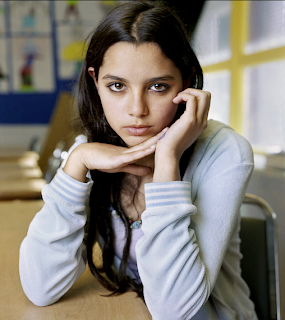 This work led to a position as artist-in-residence with Emory
University.  Part of his time there was spent in portraying the University’s commitment to diversity, called The Emory Project.  To make his point, he posed unlikely couples such as the ones below.
Here’s a link to a video showing Bey working on the Emory Project.  Here’s a link to Bey’s website, which has lots of images of his other work.  In all, you can see a real celebration of everyday people – and a deep respect for honoring their place in the world.
I like seeing the world though his eyes and meeting the people who inhabit it.  It reminds me of how much we have in common with each other.  And about those sometimes subtle qualities that we all share on our journey though our days.